In 1852, a few German Catholic families began arranging to have services by a priest who spoke German at the Catholic boy’s school at 810 N. Main St. in Bloomington. In 1867, the German Catholics asked their Bishop to send a priest for regular services, and the Bishop agreed. In 1869, the parishioners bought some lots on South Water St. (now Taylor), and built a small frame church. By 1877, St. Mary’s had its own resident pastor, and in 1881 the Franciscan Friars of Cincinnati, OH, were placed in charge of St. Mary’s. In 1886, the present Gothic church was built and, sometime after that, the brick exterior was plastered to resemble stone blocks. The church was redecorated in 1944-45, and was completely remodeled in 1962, when new stained glass windows, a chapel with a baptistery and a rear entrance to the church were added.

In 1985, St. Mary’s Hispanic community donated a statue commemorating Our Lady of Guadalupe, which was blessed and placed in the baptistery. In 1996, a $250,000 interior renovation was made to the 111 year old church. A new wooden altar, ambo and portable baptismal font were installed. Black, white and pink marble from the old main altar and side altars was used for decorative purposes elsewhere in the church. A black marble panel and steps from the old altar remained in the sanctuary. Two windows covered over sometime in the 1920’s were uncovered and stained glass added. The daily Mass chapel was separated from the church’s side entrance by a see-through partition, and the tabernacle was moved into the chapel. A stained glass window was also installed behind the tabernacle. A glass and wood partition was added to separate the vestibule from the main part of the church. On September 22, 1996 Most Rev. John J. Myers rededicated the church.  In 2016, after 135 years of service to St. Mary’s community, the Franciscans returned to Cincinnati, and the parish was placed under the care of the Diocese of Peoria. On September 10, 2017, St. Mary’s celebrated our Sesquicentennial at Central Catholic High School with a Mass celebrated by Most Rev. Daniel R. Jenky, C.S.C, and a brunch following. The celebration of the parish’s 150th Anniversary included a new photo directory, commemorative history book, and a mission November 5-7 led by Rev. Dennet Jung, O.F.M. 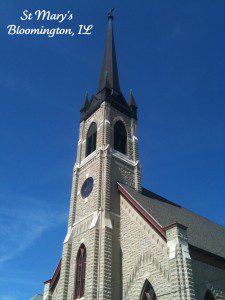